I am from breakfasts in the watermelon shed
Dr Pepper and pear preserves
made of the knobby fruit from the side yard tree
Hot humid summer nights with pallets on the floor
populated by long legged, freckle nosed cousins
From sturdy Texas stock and dog people, mostly English setters
and crazy long tailed pointers
I am from Baylor homecomings and tearful home goings
I am from Albertine and LeeRoy

I am from tall pines, dark swamps
and paper mills with their pungent smell
Fish fries in Crossett Park and tea parties with delicate china cups
I am from church on Sunday crowded with great aunts and uncles
and quarters to place in the collection plate
From armadillos, white tailed deer and tail-less blue jays
And from trips to the graves at Promise Land
I am from the kids table at Thanksgiving
I am from John Henry and Marie

I am from prairie dog towns and bluebonnet Springs
From family dinners and station wagon road trips
Moving boxes and new school rooms
From brothers and beagles and capture the flags
I am from swimming pools and man made lakes and creosote creek
Home movies and John Wayne and Swiss Family Robinson
I am from Tammy and Old Rugged Cross and Supercalifragilisticexpialidocious
From special occasions and occasions made special
I am from her songs and his laughter
I am from Rose and John L.

The moon makes me laugh.
Her face pink-gold with exertion
Pushing past the horizon,
Filling the constellations,
To rise in her nights journey.
As she climbs, she prays
in the voice of my mother,
“I see the moon, the moon sees me.
God bless the moon and God bless me.”

From the dark bedroom
My sleepy voiced husband calls,
What are ya’ll doing? Come to bed.
We can’t, I answer.
We have moon sickness.
As the dogs and I moon-bathe,
Naked on the back porch.

*** this is a poem written a long time ago But I thought with the lovely moon this weekend, I would dust it off and share it again.
The lyrics are from
Sent For You Yesterday by William Count Basie, Eddie Durham and James Rushing. Warner Bros Music, publisher.

We were walking with friends
behind their Minnesota farmhouse,
fields of cornstubble stretching to the winter gray horizon.

Suddenly from under our feet-
a heart stopping flash –
all feathers and noise and wings,
a vision of gold calling in alarm.
With our pulses pounding,
we watched the pheasant disappear.

We laughed at our fear
and marveled at the beauty and wonder
of what we had seen.

This must be what the shepherds felt
in a field a long time ago,
when they flushed
a covey of angels.

***This is a poem written many years ago but still one of my favorites. May you be surprised by joy and wonder during this Christmas season – K

The first of September has always been the opening of dove season in Texas. So all of my young life, that week before was the time Daddy got his shotguns out to clean and rummaged around to pull his hunting vests out of the closet. And many times it meant heading to my grandparents in Waco for the weekend.
Daddy, his dad, my Pampa, and maybe an uncle or cousin, and my brothers (when they were old enough) would wake and head out in the dark of the morning to the leases – property where they had permission to hunt. I imagine they would begin their day at a truck stop or small cafe for a big breakfast, stock up on vienna sausages and saltines for lunch – the beer and cokes were already in the coolers-and then head down a dusty dirt road to a likely spot to start the day.
The dogs would be let out of the cages or the trunks of the cars, given a drink and turned loose to scent the birds. And they would find them.
Dove are ground feeders, so the best leases were grain fields with stock ponds, where there would be plenty of food and water. And doves make a whistling sound as they rise up from the ground. The sound of their wings, loud and furious, as the dogs startled them from their hiding places.
And so the hunt would begin.
It would be dark thirty, as we say in our family, before the sweaty and dusty hunters would be back from their day. And I loved that smell (I know its an odd thing to love) the dust and sweat, the smell of stale beer and cigarettes, the heavy canvas bags, the dead birds, the blood. I would sit on the concrete steps and watch the tiny feathers float in the air as the men cleaned the birds.
Mom and Mamma, my grandmother, would always do the final cleaning, trying to get the very last piece of birdshot out of the meat (though most of the time somebody would bite down on a tiny piece of lead!)
Then it was time to start the cooking. The birds were pan fried with just salt and pepper and a dusting of flour. Mashed potatoes, cream gravy, biscuits and fruit salad rounded out the feast.
On a good hunting day, everyone would get their fill of dove – with the hearts a choice treat. It was a special time for our family.

I guess I am telling you this story because its that time of year and I miss my dad and that sense of belonging in that particular autumn ritual of our family.

And the dove are feeding in my yard.

Here is a poem I wrote years ago about –

September was dove season-
Guns would be cleaned,
Trips to the leases planned.
Daddy and PamPa, with uncles and brothers in tow,
Leave in the dark morning
With dogs, guns and coolers in the trunk.

Late afternoon in the deepening dusk,
The hunters arrive home
Smelling of fields and gunpowder and beer.
Small still birds spill from canvas bags,
Tiny feathers and the scent of blood
Float in the air–
A pitying of dove.

She waits
for the word to come down
her train is leaving soon –
ticket purchased
and held tightly
in her beautiful hands.

(parchment pale hands,
thin and strong,
that once held such powerful music.
And in all the keys,
she played our lives
so that we were formed
by the sound of her heart)

She waits for the bells to toll
and for the band to start –
she is easy in the going
and longing
for the gentle rocking of the rails.

… My mother caught her train yesterday morning and arrived in heaven as the angel band played a loving welcome. She was easy in the going and for that we are eternally grateful. 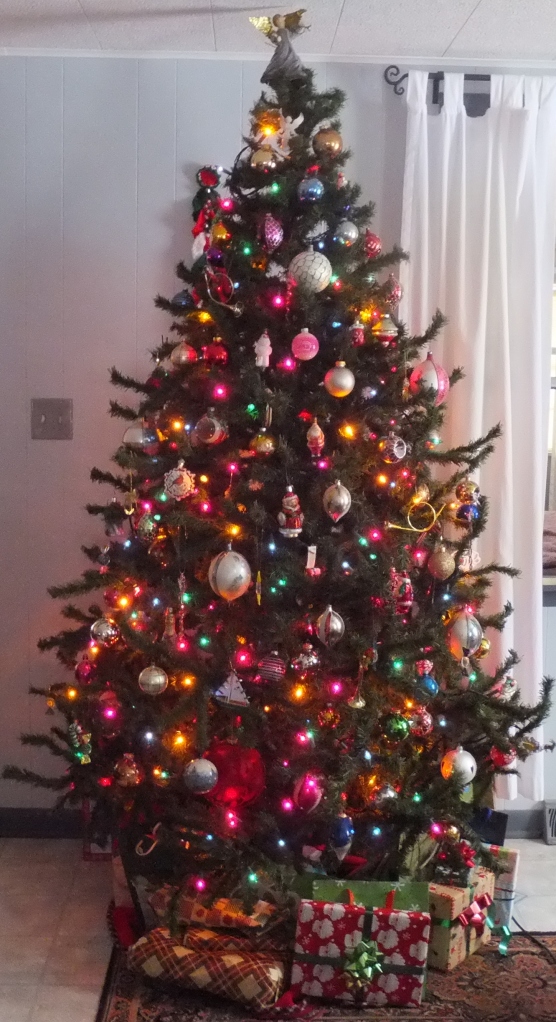 May you and yours have all things merry and bright!