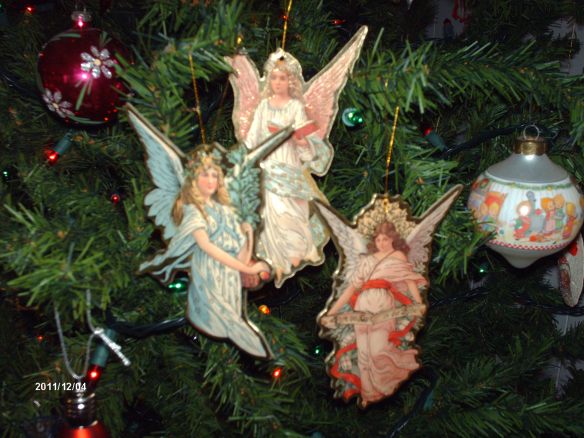 My sister in law called from Florida this morning
asking where the tradition of Christmas Eve gift comes from
and after consultation with Mom, decided it was the Allen side
that started it.
Now in our family, the tradition is whoever yells ‘Christmas Eve gift’ first
receives a present. So you lie in wait for people– I answer the phone
‘Christmas Eve gift’ all day, just in case. It can be a little disconcerting
for phone solicitors and people of short acquaintance
that don’t really know how odd we are.

And I make Christmas stockings for every newcomer in the family.
A tradition begun when we were children, our socks created
by my Dad’s first cousin and now continued for a third generation,
each hung by the chimney with care, with hopes of St Nicholas
and his eight tiny reindeer.

And our most cherished tradition is bringing out the family manger scene
of which I have custody. It is created from dime store chalk figures,
some still with the price tags from T.G.& Y. or Woolworths
and a cardboard stable with a little paper scene
glued on the back. There are the three wise men
one with a busted nose and their stately camel. The shepherds
with their two little sheep. A donkey or two to rest beside the manger.
An angel in pink, perched on the roof top that’s still covered in bits
of glued on straw. Kneeling Mary, dressed in blue, and stalwart Joseph
with his staff to stand watch over the tiny Baby looking up from the manger.

‘For unto you is born this day in the city of David a Savior, who is Christ the Lord.
And this shall be a sign unto you; Ye shall find the babe wrapped in swaddling clothes, lying in a manger.
And suddenly there was with the angel a multitude of the heavenly host praising God, and saying,
Glory to God in the highest, and on earth peace, good will toward men.’ Luke 2:11-14

All our traditions begin with Him.