Well, hi there, Dear Reader. Yes, it has been a while – all summer it seems. But lots of things have happened since the middle of May, so lets do a little catching up.

To begin with, the computer that I used for the past few years was a laptop I had for work. I knew it was on its last legs and had already received a new computer and transferred all work files, but I was still bringing the old one home to write and post.
Well, it crashed. So I was without a computer for a bit.

Then, I quit my job.

It was a great job and I had it for over 11 years. But the stress in the last 2 years had increased exponentially and it was affecting my health. It was a little like working in a minefield, always anticipating the next explosion. Not good for ones physical or mental health.

So I chose instead to stay at home with my Mom. As you may or may not know, she has been under hospice care since last August. We had two extraordinary women taking care of her while I was at work, but that cost was about the same as my salary. So now, we pay me instead.

The first week in June, we were hosts to much of my family and many friends from all over the country, as well as our dear friends here in the Ozarks, to celebrate my 60th birthday. It was a night of great music, food and drink, fire jugglers and a huge fireworks display that rivaled anything I had ever seen. It was declared a wild rumpus and it was exactly that! 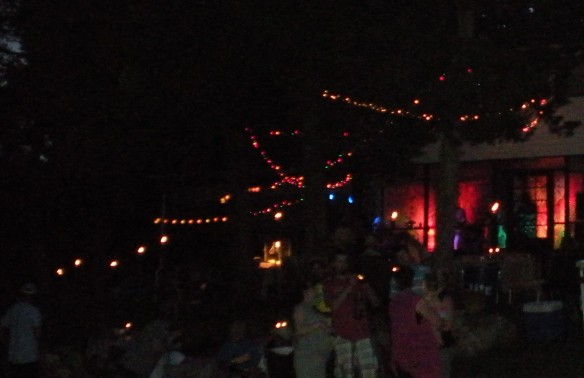 As you know, I love nothing more that having my house filled with the people I love, so this was heaven to me. And I still get a little giddy just thinking about it. One of my dearest friends, Sharon and her husband, stayed the next week and we had a absolutely great time.

One day, we went to Eureka Springs, AR, to shop and have lunch. In one of the shops, we had a very serendipitous meeting with an artist, a lovely woman, who had been a portrait artist on Jackson Square in New Orleans. She asked if any of us wanted our portrait done – and I thought – why not!

As she sketched, I guess it took about 20 minutes, we visited and got to know a little about each other. Then after the portrait was done, she said, “If anything happens to your husband, look me up. I’m bisexual.” I laughed and gave her a big hug. And told her that was one of the nicest propositions I had in a while! I got the biggest kick out of that!

It was a crazy couple of weeks to say the least.

Since then, I have been taking care of Mom full time. It is wonderful to be at home and to be able to care for her and talk to her and laugh with her. We have settled into a routine and so far so good. I am still trying to sort out time away, not only to do errands and grocery shop, but to have time to lunch with friends or go out with Bob. That is still a work in progress.

And one last thing from this crazy summer, I dyed my hair pink. Well, I’m calling it raspberry.

I LOVE it though it is fading rather quickly. Now starting to think about what color to try next – maybe violet or lavender!

As you can tell from the lack of posts, I haven’t been writing much of anything. I have dusted off The Last Really Good Shack posts and have them to someone to edit. I have an outline for a beginning, middle and end for that story, so am making that a priority for the fall. I would love to get a completed manuscript in the hands of a publisher this winter.

And I have my eyes on poetry written the past two years or so – maybe trying to get them into shape for publication.

And I have created a few tiny books of poems – I will be writing a posts about that soon.

So thank you for your continued support of my writing. I appreciate your notes of friendship – it means so much to know that you drop by and still read my poems.

All the best to you and I promise to keep in touch.
Kathleen